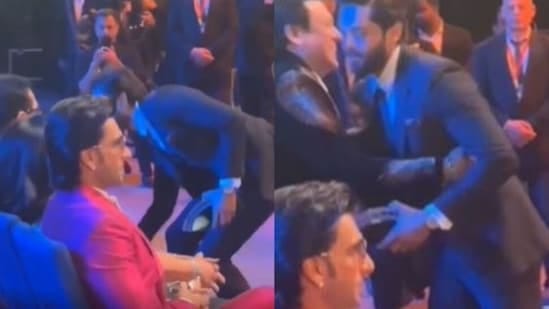 While praising Govinda and saying he started acting in the first place because of the Bollywood actor and rushed from the stage to touch the actor’s feet much to the amazement of the audience and the in the presence of Bollywood Celebrities.
Govinda welcomed him with a hug followed by a handshake.

Fahad also shook hands with actor Ranveer Singh and they hugged each other. They also shared a conversation as Ranveer smiled.

Fahad told Govind, “we are your big fans and will always be so. It’s a stroke of good luck that I am standing on the same stage where you were. Once again a huge round of applause for Govinda sir, because this is unreal…I hope Pakistan and India once again come together to do good work.”

The Filmfare Middle East Achievers Night 2022 in Dubai on Saturday 20 was a glittering event that saw most of the Bollywood Celebrities in the desert island.
Zee-5 to premiere “Chup” on OTT on November 25.
Advertisement