In a freak crime, an inmate of the Byculla jail has moved a Mumbai Special Court with an allegation that an aspiring model Divya Pahuja, arrested in connection with the Sandip Gadoli fake encounter killing case has formed a gang in the jail.

According to the inmate, Pahuja alongside her accomplice has been assaulting her everyday and making her to clean their toilets and to carry out other chores in their prison cell.

Following the allegations, the Special Court called for a report from the prison authorities.

Pahuja was arrested on July 14, 2016, for her alleged role in the fake encounter killing of Gadoli. She has been in prison since then. Gadoli was allegedly killed by the Gurgaon police in Andheri Metro Hotel on February 7, 2016, in an alleged fake encounter.

Reportedly, Pahuja was allegedly used by Haryana police as a honey trap to trace the slain gangster Sandeep Gadoli, who in turn was killed by a team of the Gurgaon police in an allegedly fake encounter in a hotel near Mumbai airport in February 2016.

Shameem Kureshi, arrested by the Narcotics Control Bureau (NCB) has alleged that she has been beaten in prison by a group of women prisoners, led by Pahuja, forcing her to do the daily chores like cleaning etc.

In the plea submitted through her advocate Munira Palanpurwala, Kureshi has alleged that time and again she has been beaten and tortured by the inmates and Pahuja is part of the alleged group.

Meanwhile last week amid her court visit, she complained that Kureshi has been forced to do various chores in prison, including cleaning toilets, and when she refused, the group assaulted her on several occasions.

After hearing her and also seeing the injury marks, the court has asked Byculla prison to submit a report by
November 7.

Kureshi was arrested on December 13, 2020, along with two others for possessing, transporting, and trafficking commercial quantities of Charas weighing 6.628 kgs. It was transported from Delhi to Mumbai by the accused.

After the investigation, the Mumbai police submitted the report in the court that the encounter was staged, but Gurgaon police maintained that Gadoli was killed in a retaliatory fire in the hotel. 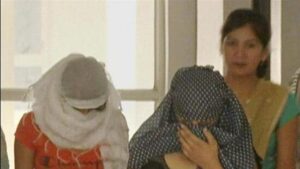 The Mumbai police alleged that it was Divya who gave constant information about Gadoli’s location to the team of Gurgaon police officers and that she was present in the room when Gadoli was killed in the fake encounter.